The Towns Fund is not just about tourism 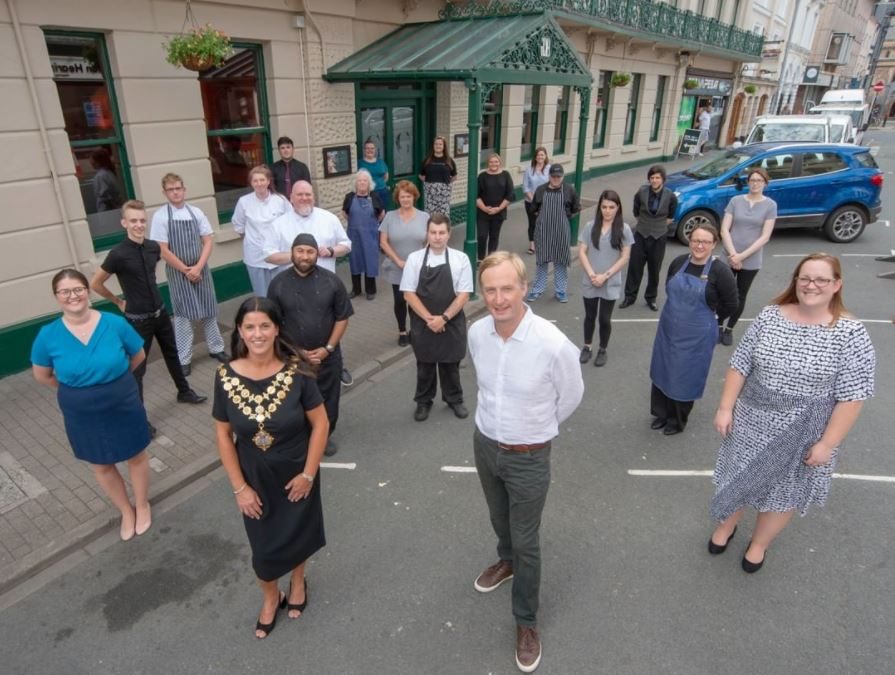 Not just tourism: Vital for the future economy of our city

Julian Vaughan is the Managing Director of The Green Dragon and one of #StrongerHereford board. Although he trained as an architect and spent time working as a Chartered Surveyor, hospitality is in Julian Vaughan’s bones.

His parents were hoteliers and as well as helping them from time to time, Julian frequently worked in hotels, restaurants and bars to fund his passage through university.

Later he worked in the horse racing industry, before supporting his wife’s family to establish Dewsall Court, a wedding venue in Herefordshire, then moving to a marketing agency in Cheltenham. Here he worked with fellow directors to specialise in hospitality marketing and the company developed a successful business with an international reputation for excellence.

His career with the agency took Julian to many parts of the country and the world. As a result, he became increasingly disappointed with the lack of large-scale, high-quality hotels in Herefordshire (where he lives with his wife of 20 years) particularly in comparison with neighbouring counties. Even though the county – and the City of Hereford – had much to offer tourists and its residents, its significant natural, cultural and heritage assets were not, he felt, being appreciated or promoted.

That’s why in 2018, Julian approached the then owner of the historic Green Dragon Hotel in Hereford to buy that business. Like many others in the Herefordshire, he felt the hotel was suffering from years of under investment and a lack of vision. Here was an opportunity to realise his ambitions for Hereford, with the help and support of a number of equally passionate and committed investors. In 2019 and after £6 million of private equity and bank investment, the fully refurbished hotel was reopened to much public acclaim. It was working well towards achieving its business objectives before having to close due to COVID19 in March 2020.

Julian’s passion for Hereford and hospitality industry experience makes him a valuable member of the Stronger Towns Board, but he stresses how much he learns from other members of the Board. He is particularly keen to emphasise that Hereford’s bid is about more than tourism. “Of course, tourism is a major part of the bid,” he says, “But it’s mainly about the long-term economic development of the city. Tourism runs in parallel with that, but there are many other factors that will contribute to the success of Hereford as a city.”

Julian takes his membership of the Stronger Towns Fund Board extremely seriously and, like fellow members, wanted to ensure the fairest and most balanced approach was taken to the selection of projects which were ultimately included in the bid. Each submitted project was assessed against criteria laid down by the Ministry of Housing, Communities and Local Government. Those eventually short-listed were then analysed against seven key themes previously established through extensive public consultation.

“We had robust, lengthy debates about which projects to choose,” says Julian. “We wanted to make sure that the projects included in our bid reflected a good representation of the various core objectives of the Stronger Towns Fund.”

Julian leant a lot from the process. “I realised how passionate people are about their city and how much effort goes into building a stronger community for future generations” he says. “I learnt a lot about on-going schemes – many of which I hadn’t heard of before. It was so interesting to be involved and I felt a real sense of responsibility in deciding with the board which projects would feature in our bid. It made me appreciate how critical collaboration with all stakeholders is for the future of any city.”

As Hereford emerges slowly and cautiously out of lockdown, Julian is hopeful for a positive result from the Stronger Towns Bid. “Success in our bid will be a critical part of our post-COVID recovery,” he says. “Ultimately, it will improve our below average GDP and help us to differentiate ourselves from other places in the UK – not just in terms of tourism, but as a place in which people want to live and work. A place that’s vibrant, sustainable, creative and connected. And a place in which young people are happy to stay.”

Who is on the board?

The #StrongerHereford board is a blend of people from private, public and community sectors who all have Herefordshire in their heart. They are a mix of parents, students, educators, business owners, employers and employees, creatives and politicians.

Who is Julian Vaughan?

Julian Vaughan is the Managing Director of The Green Dragon Hotel on Broad Street in Hereford.