Artworks will be officially launched on 15 June

From June 2022 to April 2023 German artist Lothar Götz will transform the area around No. 1 Station Approach next to Hereford Railway Station. Götz will make two monumental and vibrant geometric artworks that will be displayed on each end of Hereford College of Arts (HCA) and NMiTE’s new student accommodation. A number of dazzling flags designed by the artist will also be sited by No. 1 Station Approach. The artworks will mark the start of a new cultural gateway to Hereford, welcoming visitors and enriching residents’ experience of the city.

UK-based Götz’s intervention will be the first of four new bold commissions of public artwork at the site over four years. The No. 1 Station Approach installation is one of fourteen projects in Hereford that have been made possible thanks to a successful £22.4million funding bid to the Stronger Towns Fund.

“Public art is a wonderful way to signal and celebrate the present and future creativity of our city. I am thrilled that we are kicking off the delivery of Hereford’s visionary Town Investment Plan with a work of such boldness and vibrancy.”

“I believe having such eye-catching public art in prominent place – a gateway into city – is inspirational, hopefully sparking creativity and more contemporary public art. Art helps us reflect on who we are and who we want to be. I am incredibly proud that Hereford towns Fund bid has been able to support this work.”

An associated engagement programme will reach out to residents, visitors, students, artists as well as the wider community to stimulate debate and showcase Hereford as a cultural destination.

“Having Lothar Götz’s intervention to launch the Cultural Gateway commissions is a great honour and a wonderful opportunity for Hereford.”

Götz’s work, typically large-scale paintings, drawings and installations that respond to existing structures have included commissions for South Bank Centre, London (2014); Leeds Art Gallery (2017) and most recently the Towner Art Gallery in Eastbourne (2019) to much acclaim. He is a master in the use of colours, and it is appropriate that his work, which celebrates the great Modernist tradition of the Bauhaus, the influential 1920-30s German art school, should be displayed on a building that hosts art students.

The artworks will be officially launched on Wednesday 15 June including a talk with the artist at Hereford College of Arts’ College Road Campus. Free tickets can be booked via EventBrite.

Born in a meadow in 2001, Meadow Arts has evolved to become an important part of the creative landscape in the west of the West Midlands region, collaborating with a variety of significant partners and host locations. Having no venue of its own, Meadow Arts collaborates with highly regarded heritage buildings, historic sites, museums, universities, landscapes and public spaces. Working in partnership with other organisations is an intrinsic part of what we do. This allows us to reach a wide audience, often new to the contemporary visual arts, in areas where few other opportunities exist. 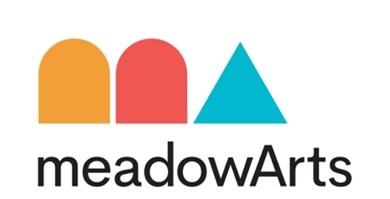